Dupuytren’s disease (also known as Dupuytren’s contracture) is a typical condition that usually occurs in middle age or later and is more typical in men than ladies. Firm nodules occurs in the tendons just underneath the skin of the palm of the hand, and in some cases, they extend to form cords that can prevent the finger straightening completely. The nodules and cords might be related with little pits in the skin. Nodules over the back of the finger knuckles (Garrod’s knuckle pads) and lumps on the soles of the feet are seen in some people with Dupuytren’s contracture. 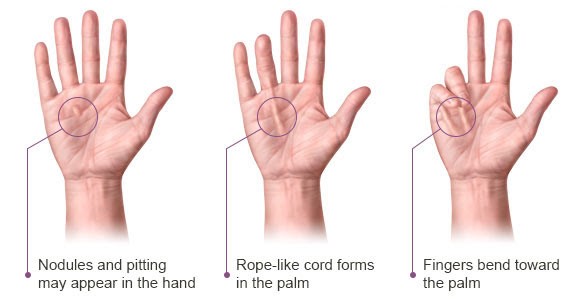 The cause of Dupuytren’s contracture is not known, but it is more common in Northern Europe than elsewhere and it is often hereditary i.e runs in families. Dupuytren’s contracture may be related with diabetes, smoking, and high alcohol consumption, but many affected people have none of these. It does not appear to be related to manual work. It rarely appears after an injury to the hand or wrist, or after surgery to these areas.

Dupuytren’s contracture begins with nodules in the palm, often in line with the ring finger. The nodules are sometimes uncomfortable when pressure is applied in the early stages, but the discomfort almost always increases over time.
In about one affected person out of every three, the nodules extend to form cords that pull the finger towards the palm and prevent it straightening fully. Without any treatment, one or more fingers may become fixed in a bent position. The web between thumb and index finger is sometimes narrowed.
Contracture of fingers is normally very slow, occurring over months and years rather than in weeks.

There is no cure for Dupuytren’s contracture. Surgery can help to make bent fingers straighter, though not always fully straight; it cannot eliminate the disease. Over the longer term, Dupuytren’s contracture may reappear in operated digits or in previously uninvolved areas of the hand. But most patients who require surgery need only one operation during their lifetime.

Surgery is usually not required if fingers can be straightened fully. It is usually helpful when it becomes impossible to put the hand flat on a table, and should be discussed with a plastic surgeon at this stage. The procedure can be carried out under local, regional (injection of local anesthetic at the shoulder) or general anesthetic.

After the surgery, it is advisable to use a splint during the night. Hand therapy will be helpful in recovering movement and function, especially for more extensive surgery and skin grafts. The recovery is variable with regard to the degree of improvement achieved and the time to achieve the final position.  The final outcome is dependent on many factors including the extent and behaviour of the disease itself and the type of surgery required.

Please fill in your details and we will get back to you.

Q: What would happen in the long run if I receive no treatment?

If the Dupuytren’s Contracture is not treated surgically, then the involved finger(s) will progressively become more rigid and contracted and eventually the patient will not be able to extend the finger at all. If many fingers are involved, loss of function of the entire hand may occur

Q: What are the possible complications of surgery?

Q: What are the chances of success?

Dupuytren’s Contracture is a very difficult problem to treat. It can recur after 5-10 years in 50% of cases. The possibility of recurrence depends not only on the surgery but also on the rehabilitation program following surgery and on the motivation of the patient and cause of the contracture.

Q: What happens after surgery?

The hand is then splinted for 3 days for comfort and active range-of-motion exercises initiated 3 days after surgery. An extension hand splint is worn at night for several months to prevent recurrent contracture. Returning to everyday and occupational activities is encouraged at the earliest opportunity.

I just had the otoplasty procedure at MACS clinic in Watford. From the initial consultation through to the surgery itself, I felt totally looked after by the brilliant staff. Everyone was very friendly and helpful, the clinic is very nice and I felt at ease at all times. Mr Vadodaria was very thorough, reassuring and happy to answer any questions and the surgery itself was painless. I wouldn’t hesitate to recommend the clinic to anyone!

Fantastic service! Lovely and approachable staff. Surgeon was incredibly informative, took the time to answer all my questions. Would highly recommend!

5 stars!!! Thank you, I’ve already recommended you to friends and family

Please fill in your details and we will get back to you.